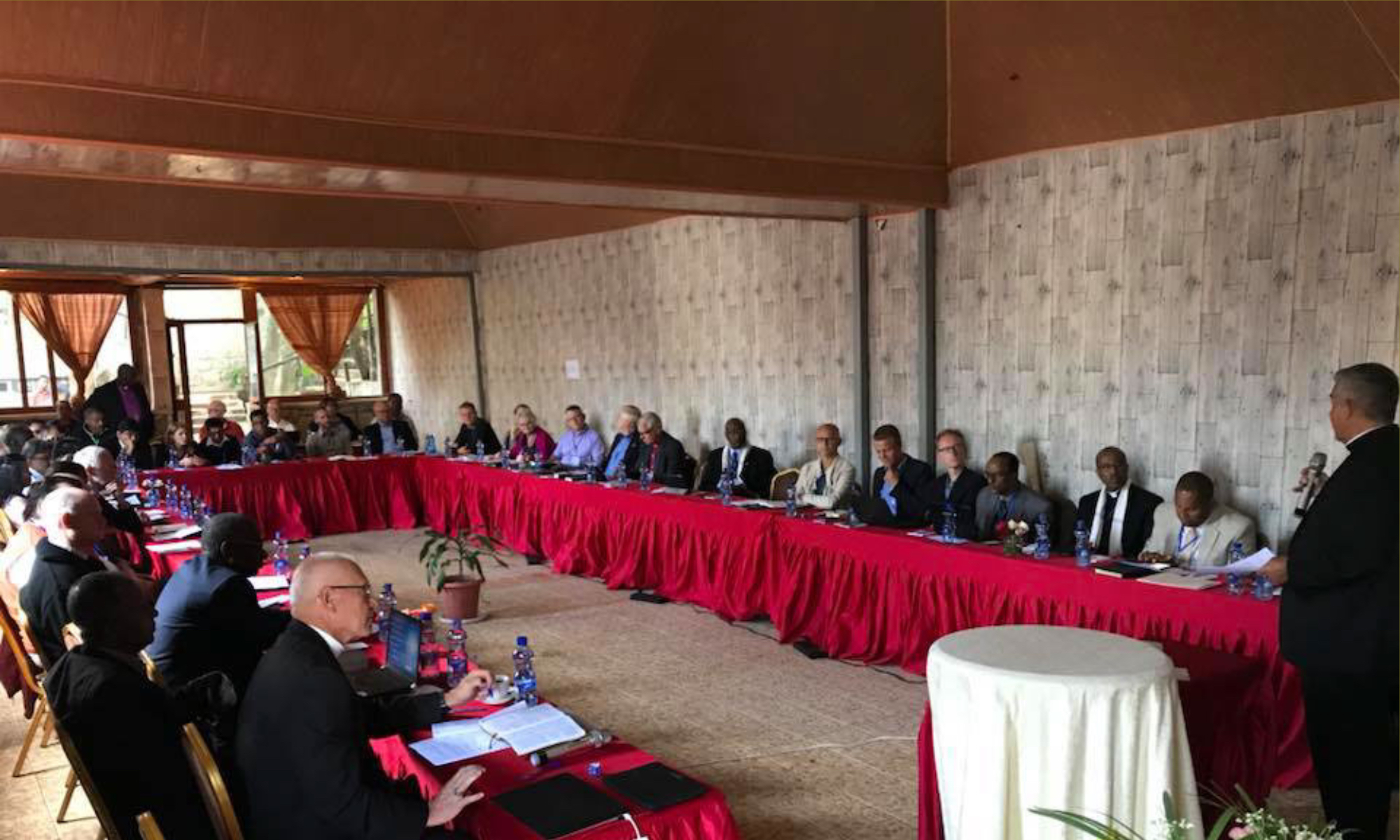 I therefore, a prisoner for the Lord, beg you to lead a life worthy of the calling to which you have been called, with all lowliness and meekness, with patience, forbearing one another in love, eager to maintain the unity of the Spirit in the bond of peace. There is one body and one Spirit, just as you were called to the one hope that belongs to your call, one Lord, one faith, one baptism, one God and Father of us all, who is above all and through all and in all. (Ephesians 4:1-6)

With these Scriptural words quoted in the Initial Statement on the Ecumenical and Inter-Lutheran Commitment of the North American Lutheran Church, approved at the 2011 NALC Convocation, we acknowledged the goal for which our Lord prayed at the Last Supper, as He said, “Holy Father keep them in thy name, which thou hast given me, that they may be one, even as we are one…that they may all be one, even as thou, Father, art in me, and I in thee, that they also may be in us, so that the world may believe that thou hast sent me.” John 17:11b

. And more than acknowledging our Lord’s prayer, we committed ourselves to working together within the kingdom for unity in the Body of Christ, that increasingly, the world would see that “There is one body and one Spirit…one Lord, one faith, one baptism, one God and Father of us all…”

While some point to our Core Value of being “Congregationally focused” as pointing us away from such external relationship building, our NALC Constitution, also approved in convocation August, 2010 and ratified by NALC congregations, directs us outwardly, stating, “the NALC shall participate in inter-Lutheran, ecumenical, and inter-religious relationships as a part of its ministry and mission.” (Emphasis added.)

Although the life, health and well-being of our congregations are always our primary focus, as NALC staff, we heed the instructions of our initial ecumenical statement and the NALC constitution initiating, organizing and participating in ecumenical and inter-Lutheran endeavors, as stated in the Initial Statement, “in accordance with our commitment to the Scriptures and the Lutheran Confessions.” The statement continues, “Our prayer is that the Holy Spirit will lead us into such ecumenical and inter-Lutheran endeavors in faithfulness to the Great Commission of our Lord…that all relationships should have as their goal the mission of Christ and his church, ‘that the world may believe…that the world may know” (John 17:21

You will be seeing press releases and information about three such NALC efforts that have as their aim, the developing of relationships in accordance with our commitment to the Scriptures and the Lutheran Confessions, but always to further mission in general and specifically our obedience to the Lord’s command to “Go, baptize, make disciples, teach…” (Matthew 28:19

). While more information will be shared elsewhere, it seems worthwhile providing a brief glimpse into these recent activities as they fulfill our ecumenical and inter-Lutheran commitments.

The formation of the Global Confessional and Missional Lutheran Forum (GCLMF) was initiated by the NALC and several other mission and reform movements in Scandinavia and Germany. At the invitation of the North American Lutheran Church, the first Global Forum took place in August 2015, in conjunction with the NALC Lutheran Week in Dallas, TX. The Global Forum also met during the 2016 NALC Lutheran Week in Anaheim, CA and in 2017 in Nashville, TN. The forum met September 4-6 in Bishoftu, Ethiopia with 43 participants in attendance, more than doubling previous participation. There were 15 nations represented at this forum, present, as stated in the Mission Statement, “to provide support and encouragement for those who are working for the reform and renewal of the Church throughout the world in accordance with the witness of the Holy Scriptures and as affirmed in the Lutheran Confessions.” The Forum also exists to “engage in Biblical and theological reflection and will stimulate strategies that will carry out the mission Christ gave to his church – namely, to make disciples of all nations.”

Two keynote presenters at the Global Forum addressed mission and discipleship within the east Africa context and in North America. It was also decided to prepare a “Bishoftu Letter to the Lutheran Churches,” based on the GCMLF Affirmation of Faith. The Letter is a call to faithfulness to the Triune God, Father, Son and Holy Spirit; a call to commitment to God’s Word; a call to obedience to Jesus Christ. It is a call to all Lutheran Churches in the world to “work for reformation within the Body of Christ, through…repentance…submission and obedience to Christ…through the Holy Spirit conforming our lives…through refocusing on the mission Christ gave to His Church.”

Clearly, the work of the GCMLF is closely related to the goals and mission of the NALC and well worth our investment. The Bishoftu Letter to the Lutheran Churches was released Reformation Day, October 31, 2018. Translations into other languages will be released in due time.

The International Lutheran Council’s (ILC) 26th Conference took place September 25-28 in Antwerp, Belgium. Bishop Bradosky and I were present as invited guests. The conference focused on the theme, “Ecumenism and Ecclesiology.” Lectures and responses were offered on the theme, the days began and ended with Morning and Evening Prayer in the beautiful and historic churches of Antwerp, and we observed the commemoration of the first martyrs of the Lutheran Reformation.

Two monks who had studied with Luther in Wittenberg, returning to their Augustinian monastery in Antwerp bringing the new Lutheran ideas to the “Low Countries,” until on July 1st, 1523, they were burned at the stake in Brussels, Belgium.

What else happened during the conference? Among other things, a resolution was presented and passed in response to the Lutheran World Federation’s action discontinuing annual meetings with representatives of ILC, affirming the desire and willingness of the ILC to continue meeting for the sake of conversation, clarification and exchange of information.

Also approved at the conference was a resolution indicating support for the proposed formation of a formal ecumenical dialogue between the ILC and the Roman Catholic Church’s Pontifical Council for the Promotion of Christian Unity. Informal conversations have taken place since June 2014, but this proposal will elevate this to the level of a bilateral dialogue.

Celebrated at the conference was the reception of new members and official observers, largely as the result of the incorporation of the ILC as a council independent of the Lutheran Church-Missouri Synod and their change in bylaws allowing for associate memberships and observer status “with exception”—meaning church bodies, movements or individuals may join as official observers, taking exception to certain articles of the ILC constitution. As a Lutheran body committed to the truth and authority of Holy Scripture and the Lutheran Confessions, it is a blessing and an opportunity for the NALC to be present and in conversation with like-minded Lutherans from around the world.

Although we have been meeting annually with the USCCB ecumenical officer for a brief conversation and update, this is the first time we have met for a significant consultation. While updates were shared regarding our ministry, the primary focus of the meeting was the presentation of the NALC Resolution inviting the USCCB to enter into a formal ecumenical consultation with the expressed purpose of “fostering conversation and cooperation in all areas appropriate and possible but especially with regard to missionary discipleship, the promotion and defense of a Biblical understanding of marriage, the sanctity of all human life, the confusion in our culture regarding gender and God’s creation of humanity as male and female, and the defense and promotion of religious liberty…”

The resolution, approved unanimously at the recent 2018 NALC convocation in Denver, was well received by these representatives and stimulated considerable conversation regarding the NALC’s Life-to-Life Discipleship initiative, the Roman Catholic emphasis on “missionary discipleship,” begun by Pope John Paul II and most recently furthered by Pope Francis’ exhortation, “The Joy of the Gospel.” The Secretariat of Ecumenical and Interreligious Affairs gathered for their regular meeting after our consultation, and they shared that they would be bringing our resolution to the group as a whole. We are awaiting their response. At the least, it appears we will continue with this more significant annual meeting and conversation. A biannual consultation similar to those we have with other bodies is also possible.

In summary, exciting things are happening as we engage in ecumenical and inter-Lutheran conversations as part of our ministry and mission!