Greetings in the Name of Jesus Christ-

My wife, Nyandit, and I will be missionaries in the refugee camp in Gambella, Ethiopia, beginning January 2019, working with EECMY and the Lutheran Church of South Sudan. We will be living in the southern part of Ethiopia. We already know the Gambella area because we were born there. We know the Ethiopian people, their society and much of the economy. 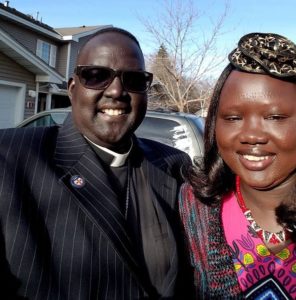 On June 4, 2017, I left Minnesota to fly to Addis Ababa, Ethiopia and from there connected with a flight that took me to Gambella, Ethiopia, near the South Sudan border. I was in Gambella for five days. After I arrived, two of my uncles arrived by bus from Gambella, Ethiopia; it was a two-day journey for them to reach that destination. While in Gambella, I also met with several relatives who came together to make arrangements for the funeral of my cousin,Dobiel Yual. He passed away on May 28, 2017.

It was a great joy for me to visit a refugee camp near Gambella where several of my relatives are.  I visited houses of many families I know from the village. I ministered to the people there by sharing the love of God through Jesus Christ and conducting a Bible study. Some of the people at the refugee camp are not Christians and the texts focused on the need for the love of God. Many people there love God a lot and love to see people from America. The Sudanese deacon in the village washed my feet while I was at the refugee camp.

On June 21st, I worshipped at a Presbyterian church called Bethel in the morning. Then we drove for two hours to Kuergeng, Ethiopia, and worshipped at the Kuergeng church in the nearby village of Kuthong, where my cousin is the chief leader. I grew up there. Members from the congregation told me they have a large number of people who want to be baptized. So, I baptized many people there.

A lot of people there were excited to see me because I have been in America for about 24 years. While there, I gave the medicine that was donated for the people there. The people have a great need for medication, so while I was there I made a list of medicines that are needed for the children. We met with elders and deacons from the village of Kuthong; approximately 300 people. They talked with me about the medicine I had brought along from America, and hoped that it will work there in the village and refugee camp. They got excited and shared that two years ago, in that village, thirty-two people died from simple diseases and we were doing a good thing by bringing medicine along. They explained that they don’t have any wells and people have to go to the river to collect water. We shared a meal together and drank milk from a cow.

On June 22nd, we had a memorial service for my cousin, Dobiel. I spoke at the funeral and said goodbye to my cousin. I told the people who love him that it is our prayer that we will all see him on the resurrection day. I also talked about real love coming from Jesus Christ who gave everything, even his life, for you and for me and for all to have freedom in the Gospel. Jesus said, “There is no greater love than for a man to give up everything and lay down his life for his friends.” 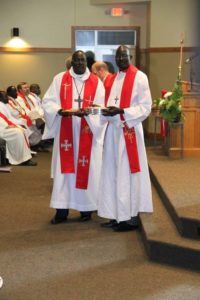 We flew back to Gambella where I stayed for about three weeks and visited people there—friends in the government in Gambella, Ethiopia. While there, I was taken to churches to meet many people. I told them, “I am thinking about all of you and pray for you and your leadership in the Lutheran Church of South Sudan in Gambella, Ethiopia. And, I hope to see you soon.”

During my trip last year, I visited the refugee camps around Gambella, Ethiopia. The whole area was in crisis because of the impact of war and climate change. The rains had not come at all last year, and they were late, and light, this year. A substantial number of people in town began to experience hunger, and the pastor preached about the need to pray for and serve those in need.  People in the refugee camps around Gambella, Ethiopia are suffering a lot from hunger. Almost everyone is suffering in the area.

At least 500 people died in one day alone after the soldiers turned on each other in the capital of Juba, July 8, 2016. A 10-year-old boy lost his father, mother and sister on that day and he was left with nothing. The United Nation took the boy to a refugee camp and start his schooling. That boy is very lucky. I know about thousands of other civilians who were killed, on December 13, 2013 in Juba, South Sudan, because of their ethnicity. More than three million people have been forced to flee their homes to neighboring countries. Half a million people are still sheltered in United Nations compounds, and hundreds of thousands in refugee camps. 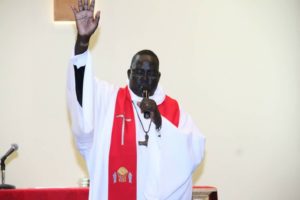 During my internship in Des Moines, I visited with a young South Sudanese woman on a Sunday after worship at her new home. She is the mother of four children. She is among the refugees I now know in America. She came to the Sudanese worship service at Trinity Lutheran Church on the day of Pentecost, where I was the Sunday preacher. Her heart was heavy with sadness. She lost three beautiful daughters and two of her nephews were killed in the war in South Sudan. She asks, and so do I, that we keep those who remain in camps in your prayers. It is not easy to lose loved ones. Sudanese people are suffering a lot because of war and famine. It is not easy to try to make a new life in a new country, such as America, she said. It is terrible to lose those whose lives you value more than your own. Her brother and sister-in-law’s entire family died in the war in South Sudan.

Finally, I would like to say “thank you” to the people from our denomination, the North American Lutheran Church (NALC), for your support and generosity. My wife, Nyandit Rika, and I will be moving to Gambella, Ethiopia in January to begin a new life as missionaries there.

For more information or to learn how you can support Pastor James and Nyandit as NALC Global Workers, please visit:  The Great Commission Society.