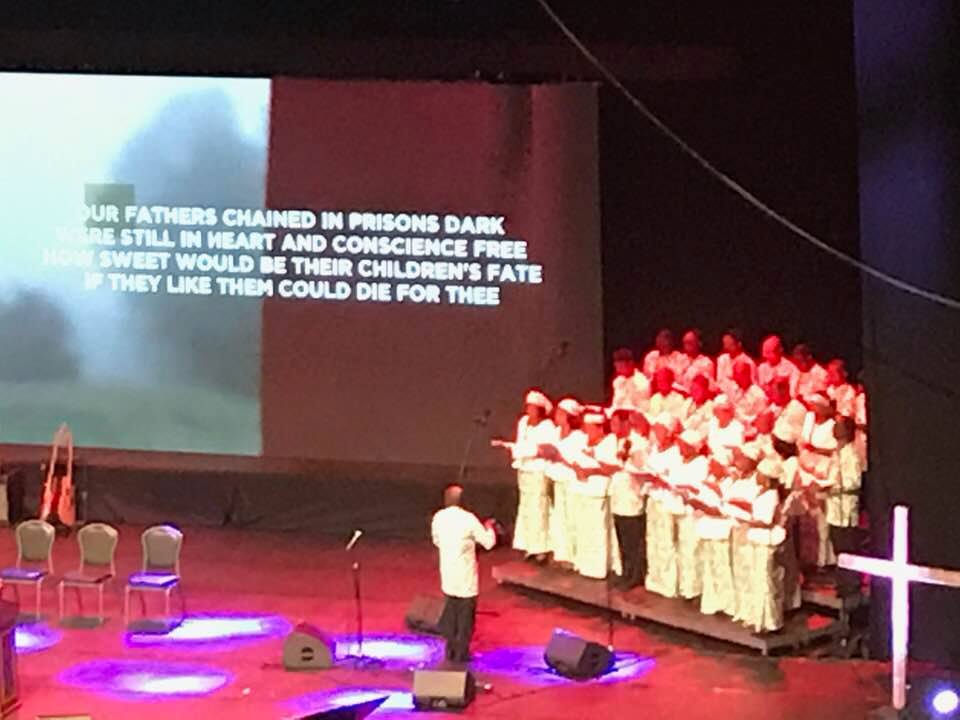 The North American Lutheran Church sent a delegation of three as ecumenical observers to the third Global Anglican Future Conference (GAFCON) in Jerusalem in June. Attending as observers were Bishop John Bradosky, Pastor David Wendel and Pastor Bassam Abdallah. The invitation to attend this “by-invitation-only” conference was extended to us by representatives of the Anglican Church in North America (ACNA). The NALC and ACNA have been in ongoing ecumenical consultations since the formation of the NALC.

The Initial Statement on Ecumenical and Inter- Lutheran Commitments of the North American Lutheran Church states:

Our confessional commitment leads us to participate in ecumenical and inter-Lutheran associations in response to Jesus’ prayer that all his believers may be one. We intend to engage in ecumenical and inter-Lutheran endeavors at the international, national, and local levels, in accordance with our commitment to the Scriptures and the Lutheran Confessions. …

As an initial strategy the North American Lutheran Church will … give priority to relationships, including ecumenical dialogues, with churches such as the Anglican Church in North America, the Roman Catholic Church, and the Orthodox Churches. …

The bishop of the NALC will initiate contact with and respond to all Christian churches, denominations, bodies, judicatories, and fellowships that desire to be in communication and conversation with this church, for the sake of Christian unity and the mission of the Gospel. Through our ecumenical and inter-Lutheran relationships, the NALC wishes to be an expression of our oneness in Christ, the uniqueness of Christ as the Savior of the world, and the apostolic mission we share in his name. … 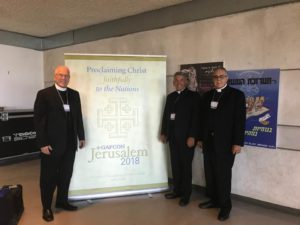 As the NALC was being formed in 2010, an invitation was extended by the Most Rev. Robert Duncan, Archbishop of the also newly-formed Anglican Church in North America (ACNA), for an ecumenical consultation to begin. Although our paths out of previous church bodies were markedly different, we shared a firm commitment to Jesus Christ as the unique and only Savior of the world. We stood firmly together on the truth and authority of God’s unchanged and unchanging Word, especially with regard to marriage, human sexuality and the sanctity of all human life.

It is our mutual commitment to pursue the development of ecumenical relationships between the ACNA and the NALC on the basis of Holy Scripture. Jesus’ prayer “that they all may be one … so that the world may believe” (John 17:21) calls us to give expression to our unity in Him as a vital part of our witness to the world and an expression of the power of the Gospel. It is further our commitment to pursue this relationship on the basis of strengthening the capacity of both church bodies for mission and ministry; strengthening both pastoral leadership and congregational outreach.

We were blessed by the experience, witness and courage of the ACNA and their bold leadership as we formed the NALC. Since that time, we have continued meeting twice a year for consultations, which have resulted in a joint affirmation on the biblical understanding of marriage together with the Lutheran Church—Missouri Synod and the Lutheran Church—Canada.

In 2017, we completed and made available to congregations four Pastoral and Educational Affirmations stating our consensus on Jesus Christ, the Gospel and Justification, Holy Baptism, Holy Communion and Holy Scripture.

We are currently developing an affirmation on our shared understanding of, and commitment to, discipleship and the Great Commission, which we hope will lead to a joint conference called, Disciple Life 2020, in conjunction with the NALC Pastors Conference in February of 2020.

An important aspect of our developing relationship has been mutual conversation, support and encouragement. We have invited representatives of the ACNA to attend and greet our annual Convocation, and we have been present for their Provincial Assemblies. Together with the United States Conference of Catholic Bishops and other religious leaders, we have met to discuss and prepare open letters regarding marriage, religious liberty and gender identity.

Separating from previous church bodies and taking firm stands with regard to these issues are not easy or simple tasks. We have benefitted by having faithful partners with whom we stand, pray, consult and cooperate.

In that regard, early in 2017, ACNA leaders in our consultation shared with us that plans were underway for the third Global Anglican Future Conference to be held in Jerusalem in June 2018. These GAFCON gatherings were first organized by the Global South Anglican Network, with the initial conference taking place in 2008 in Jerusalem.

The first GAFCON produced the Jerusalem Statement and Declaration, through which the Conference “took up the challenge of restoring biblical authority (and the teaching on human sexuality in particular) by affirming the primacy of the Bible as God’s Word written and going back to the other sources of Anglican identity … The Conference also constituted a Primates Council and authorised it to recognise Anglican churches in areas where orthodox Anglicans had been deprived of their church property and deposed from holy orders.” 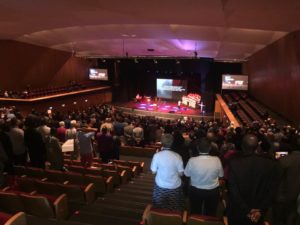 In other words, GAFCON directly challenged the move away from the truth and authority of Holy Scripture. It challenged the reinterpretation of biblical Christian teaching with regard to sexuality and marriage and affirmed the Anglican Christians in Canada and the United States who, in response to the lack of repentance in their church bodies, believed they were compelled by the Word of God to leave those church bodies and form new communities that would respect and uphold “the Bible as God’s Word written,” in accordance with Anglican belief, teaching and practice. Eventually, provincial Anglican bishops in the global south provided support, oversight and encouragement to Anglicans in North America, leading to the formation of the Anglican Church in North America.

GAFCON was foundational in supporting those biblically and confessionally faithful Anglicans who now, largely, comprise the ACNA. Because GAFCON is so important to the history of the ACNA and critical to the calls for repentance and renewal in the Anglican Communion, the NALC was invited to send a delegation to GAFCON 2018. This is the first time an ecumenical delegation has been invited to GAFCON and is an important first step toward recognizing the global and ecumenical impact of these gatherings.

There were several goals for NALC representation at GAFCON. Primarily, we were invited to attend in support for our coworkers in the Gospel from the Anglican Church in North America.

“Our folks in the NALC understand that it is not easy to take such a stand against the institutional church and the dominant culture. We know from first-hand experience the criticism and opposition that comes from holding fast to the truth of God’s Word,” Bishop Bradosky said. “ACNA has been under fire in many ways since they first left the Episcopal Church (USA), by the Episcopal Church and the Archbishop of Canterbury, who have refused to acknowledge and recognize them as part of the Anglican Communion. We were invited to come observe, but also to support our brothers and sisters in ACNA as they continue ‘to fight the good fight of the faith,’ as we read in 1 Timothy 6. They asked us to come, so we went … and we were blessed by the strong stand they are taking and their witness to Anglicanism and the world.”

The 2018 GAFCON Assembly culminated in a public Letter to the Churches. It may be found at www.gafcon.org/news/letter-to-the-churches-gafcon -assembly-2018. A few excerpts from the letter may communicate the boldness with which the participants preach, teach and witness as they seek to call Anglicanism, and the Christian Church as a whole, back to the Word of God:

The third Global Anglican Future Conference (Gafcon) was held in Jerusalem in June 2018, a decade after the inaugural Gafcon in 2008. Gafcon 2018, one of the largest global Anglican gatherings, brought together 1,950 representatives from 50 countries, including 316 bishops, 669 other clergy and 965 laity. A unanimity of spirit was reflected throughout the Conference as we met with God in the presence of friends from afar. We celebrated joyful worship, engaged in small group prayer and were inspired by presentations, networks and seminars.

We met together around the theme of “Proclaiming Christ Faithfully to the Nations”.  Each day began with common prayer and Bible exposition from Luke 22-24, followed by plenary sessions on God’s Gospel, God’s Church and God’s World.

We renewed our commitment to proclaim the gospel of the triune God in our churches and in all the world. Our Chairman reminded us in his opening address: “God’s gospel is the life-transforming message of salvation from sin and all its consequences through the death and resurrection of the Lord Jesus Christ. It is both a declaration and a summons: announcing what has been done for us in Christ and calling us to repentance, faith and submission to his Lordship.” It involves the restoration and reaffirmation of God’s original creative purposes. It is addressed to men, women and children and it is our only hope in the light of the final judgment and the reality of hell.

This is God’s gospel, the gospel concerning his Son (Romans 1:1–3). The center of the gospel message is this one person, Jesus Christ, and all that he has done through his perfect life, atoning death, triumphant resurrection and glorious ascension. In our daily expositions, we followed Jesus’ path from the judgments by Pilate and the Jewish leaders, to his death for us on the cross, to his breaking the bonds of death on Easter morning and to his commission to the disciples to proclaim “repentance for the forgiveness of sins in his name to all nations” (Luke 24:47). The uniqueness of Jesus Christ lies at the heart of the gospel: “there is salvation in no one else, for there is no other name under heaven given to mankind by which we must be saved” (Acts 4:12). The gospel confronts us in the midst of our confusion and sin but it does not leave us there. It includes a summons to repentance and a call to believe in the gospel (Mark 1:15), which results in a grace-filled life. The ascended Christ gave his Spirit to empower his disciples to take this gospel to the world.

Yet faithful proclamation of this gospel is under attack from without and within, as it has been from apostolic times (Acts 20:28-30). …

In light of the recommendations of the Synodical Council, we respectfully urge the Archbishop of Canterbury

+ not to invite bishops of those Provinces which have endorsed by word or deed sexual practices which are in contradiction to the teaching of Scripture and Resolution I.10 of the 1998 Lambeth Conference, unless they have repented of their actions and reversed their decisions.

In the event that this does not occur, we urge Gafcon members to decline the invitation to attend Lambeth 2020 and all other meetings of the Instruments of Communion.

It should be noted, the last statements quoted from the letter carry the most weight, practically speaking. For Anglicans, the next worldwide gathering of bishops and archbishops of provinces (Lambeth 2020) is critical to the maintenance of “communion.”

GAFCON is calling for the inclusion of ACNA and the Province of the Anglican Church in Brazil and for the rejection of those bishops of Provinces which do not repent and reverse their decisions.
If this doesn’t happen, the GAFCON bishops are urged not to attend Lambeth 2020. This action on the part of GAFCON bishops and participants is powerful and demonstrates their unwavering commitment to the Word of God and faithful biblical teaching and practice. Together with the ACNA faithful, we applaud their decision and support them in their efforts to uphold God’s Word of truth.

At the end of the Conference, we were reminded of Martin Luther’s words at the Diet of Worms in 1521, when Luther stood against church and empire, confessing, “My conscience is captive to the Word of God. Here I stand, I can do no other. God help me. Amen.”

Witnessing firsthand the courage and commitment of these faithful Anglicans, Bishop Bradosky said, “It is my hope and prayer that Lutherans from around the world would be so faithful and so bold.”