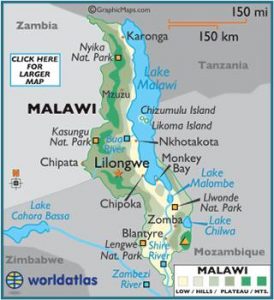 Pastor Ralph Easterhaus and I flew into Lilongwe, the capital of Malawi, on Saturday, June 24th, after an unintended one-day layover in Johannesburg due to a missed connection. The planned 90-minute layover turned out to be 45 minutes too short, as our flight out of Frankfurt departed late. Thankfully, the night in Johannesburg gave us a chance to rest from the long travel day, so we arrived rested and acclimated to the local time zone. Malawi is about 2 hours northeast of Johannesburg by air, surrounded by Mozambique, Zimbabwe, Zambia, and Tanzania. We spent the first week in Lilongwe (population 2.2 million), and the second week in Salima (population 400,000), a town east of the capital on Lake Malawi, just north of Chipoka. Since we were in the Southern Hemisphere, Malawi was in the middle of winter; highs were in the upper 70s and low 80s, and evenings were in the mid-50s. Since few buildings are air conditioned, this made for a perfect teaching climate!

Until 1964, Malawi was part of the British Commonwealth; now, it’s an independent republic with an elected President. However, vestiges of its colonial days still remain. The national language for business and government is English (including signs on most buildings), but the usual spoken language is Chewa (pronounced “chay-wa”). People drive on the left side of the road, and steering wheels are on the right side of the front seat People wait in “queues” at stores, and you fill the tank in the car with “petrol.” Measurements are all according to the metric scale, and temperature is recorded as degrees “Celsius” rather than “Fahrenheit.”

Speaking of driving, the major roads in Lilongwe (and between the capital and the outlying towns) are all two-lanes with very little side apron to them. Roads into the villages are all paved with dirt and very bumpy. Except in the downtown area, sidewalks are nearly non-existent. Many pedestrians walk alongside the road, as do scores of bicyclists, flocks of goats, and the occasional ox- or donkey-drawn cart. Many roadside vendors and impromptu markets crowd the streets and intersections. Traffic signals and signs are few and far between; both street lights along the side of the road and street signs designating the names of specific roads are rare. Cars and trucks use their horns regularly (and loudly!) to make their way through the congestion.

Housing for the vast majority of people is very simple. There is some Western-style housing (behind walled compounds) primarily for the wealthy, the government leaders, and the diplomats. Nearly 90% of Malawians live in 3-4 room, single-story brick homes. The poorest have thatched roofs, and those with more income may have a tin roof. There are few furnishings in the average home. Most people sleep on woven mats rather than beds. Less than half of these homes have electricity. Few have inside running water or plumbing. Most kitchens are outside, attached to the house; some are larger for the entire village. Most villages raise their own crops and tend communal flocks of goats and chickens. Aside from subsistence farming, there are few commercial or manufacturing jobs. There are some jobs available in the service industry; others tend small stalls in markets along the road or in the Old Town part of Lilongwe. There are few multi-story buildings in the capital; we saw a new five-story hotel being built, and even the government buildings were only two stories tall. In Salima, we didn’t see any multi-story buildings.

Our host for the first week, Pastor Alex Chambaro (and his son, Leonard), picked us up at the airport and brought us to our hotel. There, we unpacked, settled in, and exchanged some money (the Malawian currency is called a “Kwacha” – and trades at 720 per US Dollar). Our accommodations both weeks were very comfortable. We were grateful for the mosquito netting, although we needed it more in Salima than we did in Lilongwe. Breakfasts were included with our lodging. We ate lunches with the pastors (the first week, Alex also took us to local Western-styled restaurants), and we purchased dinner in the hotel restaurant. Everyone we met exuded a genuine warmth and hospitality that set us at ease right away. It was a little disconcerting, though, to be in the clear minority. We saw very few Westerners during our time in Malawi, although Alex reported that many from India and China live and work in Lilongwe. 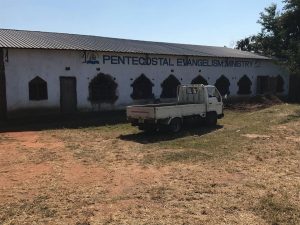 This first week we taught at Pentecostal Evangelical Ministries, a group Alex founded after leaving the Assemblies of God Church community in which he had pastored for many years. He felt God calling him to leave his settled and comfortable ministry to begin this new venture. He and his colleagues have planted over 100 new congregations throughout Malawi, and his church in Lilongwe where we taught is the “mother church.” Approximately 150 pastors and evangelists attended; both men and women participated, though more men than women.

We spent the second week in Salima, a medium-sized city near Lake Malawi. The lake reminds me of Lake Michigan by its size and the waves we saw during our Saturday afternoon visit. The beaches are a popular destination throughout the year for those with the means to travel; as a result, you will find many western-styled hotels along the lake. We walked the beach and enjoyed a relaxed conversation with our host for the second week, Pastor Philip Phiri.

He is the leader of the evangelical ministry “Pillars of Fire.” He went to seminary in Nigeria several years ago before founding his church. It has now multiplied to six “branches.” He was a gracious host and made our time with the pastors and evangelists of his community very enjoyable. Sixty-five men and women attended the conference in Salima. We met in one of the villages about 6km outside of town. During the week, the building is used by an orphanage. On the weekends, his church rents the space for their services. The smaller, more intimate setting allowed for more discussion and conversation, especially after each teaching session. Ralph and I would ask if there were any questions, and as the week progressed, this Q&A time became longer and longer.

Each weekend Ralph and I worshipped in local congregations. Both of us preached, and the services were incredibly worshipful. The first weekend, worship at Pastor Alex’s church lasted four hours – but it didn’t seem like it at all! It was filled with music by several singing groups of all ages, four testimonies from worshipers about God’s presence and activity in their life, an offering, a sermon from each of us, and a freewill thank-offering for us for the week of teaching we were leading. I was touched by this thank offering, because the people don’t have much, but nearly everyone came forward to give something. One gentleman gave a plastic ballpoint pen as his offering, as he didn’t have any money to share but he wanted to give something in support of what we were doing. Oh my!! It was interesting to experience their prayer time – when Pastor Alex said, “Let’s pray” the entire congregation broke out in prayer together. It sounded like the first Pentecost Luke describes in Acts 2!

The second weekend, we worshipped with two of Pastor Phiri’s congregations in two of the smaller villages outside of Salima. At both churches, the members greeted us as we drove up, singing beautiful Christian songs in Chewa (the native language of Malawi). These churches were smaller than Alex’s congregation, but just as warm and welcoming. Music at these services was a cappella and including beautiful harmonies! Each service was closer to two hours long, but the Holy Spirit was clearly evident in both ministries!

The participants both weeks were thrilled to receive a Bible. They contained both the Old and New Testaments, in the local language, Chewa. As you can tell from the size of the pen next to it, the Bible was approximately 5” high by 4” wide. In some cases, the pastors/evangelists didn’t have a Bible. In other cases, the ones they had looked like those pictured below.

It was clear from what both Alex and Phillip said to the conference participants that they will treasure these new Bibles and the bookmarks our children made. It is crucial that they have this important tool for their ministry. This gift also affirms their calling to be pastors and the seriousness with which they take that calling.

We finished our conference in Salima on Thursday. Alex and his son brought us back to Lilongwe. On Friday, we met with representatives from the Evangelical Lutheran Church in Malawi (ELCM). We thoroughly enjoyed our two-hour long visit with them, as we shared the history and ministry of the NALC and our desire to work with them should they want similar teaching conferences in the future for their pastors, evangelists, and/or laypeople.

We met with the Rev. Feston Phiri, Director of Training, and the Rev. Evance Mphalasa, the Assistant General Secretary. Both are involved with personnel development for the pastors, evangelists, and key lay leaders in the Church, and will be the perfect people with whom to work to organize future ministry training seminars. Two NALC pastors are hoping to work with them in January 2018, for a women’s seminar.

It was abundantly clear to both of us that the Holy Spirit was guiding our time in Malawi. I felt that guidance most clearly as I was teaching, as I adjusted what I said and how I said it “on the fly” to make my presentations more approachable to a non-English speaking audience. We also were keenly aware of the Holy Spirit in the vibrancy of the pastors and leaders, and in their descriptions of their ministry with the people. Healings and exorcisms are very common, and people’s testimonies about this during worship each weekend was both heartfelt and well received by worshipers. God is active and alive for them – thanks be to God!

I know that my own faith was strengthened, and that God answered my prayer to learn from the participants as much (or more) than I gave them. I will treasure my time in Africa for the rest of my life, and I’m confident God will use it in my teaching and preaching from now on. I look forward to going back again whenever the opportunity presents itself. The need is certainly there, and the pastors with whom we spoke are interested in continuing this partnership. ALWM is committed to an ongoing relationship with local churches. I can’t imagine there not being an opportunity to go again, especially if the ELCM is open to our coming.

Pastor Allen Schoonover – child of God, husband, father, pastor, and coffee aficionado. Currently serving as the Associate Pastor at Bethel Lutheran Church in Noblesville, Indiana, Pastor Al considers himself blessed to serve. Bethel truly embodies what it means to be Christ-Centered and Mission Driven.  For more information about ALWM or ways to partner in mission and ministry, please visit:  The Great Commission Society