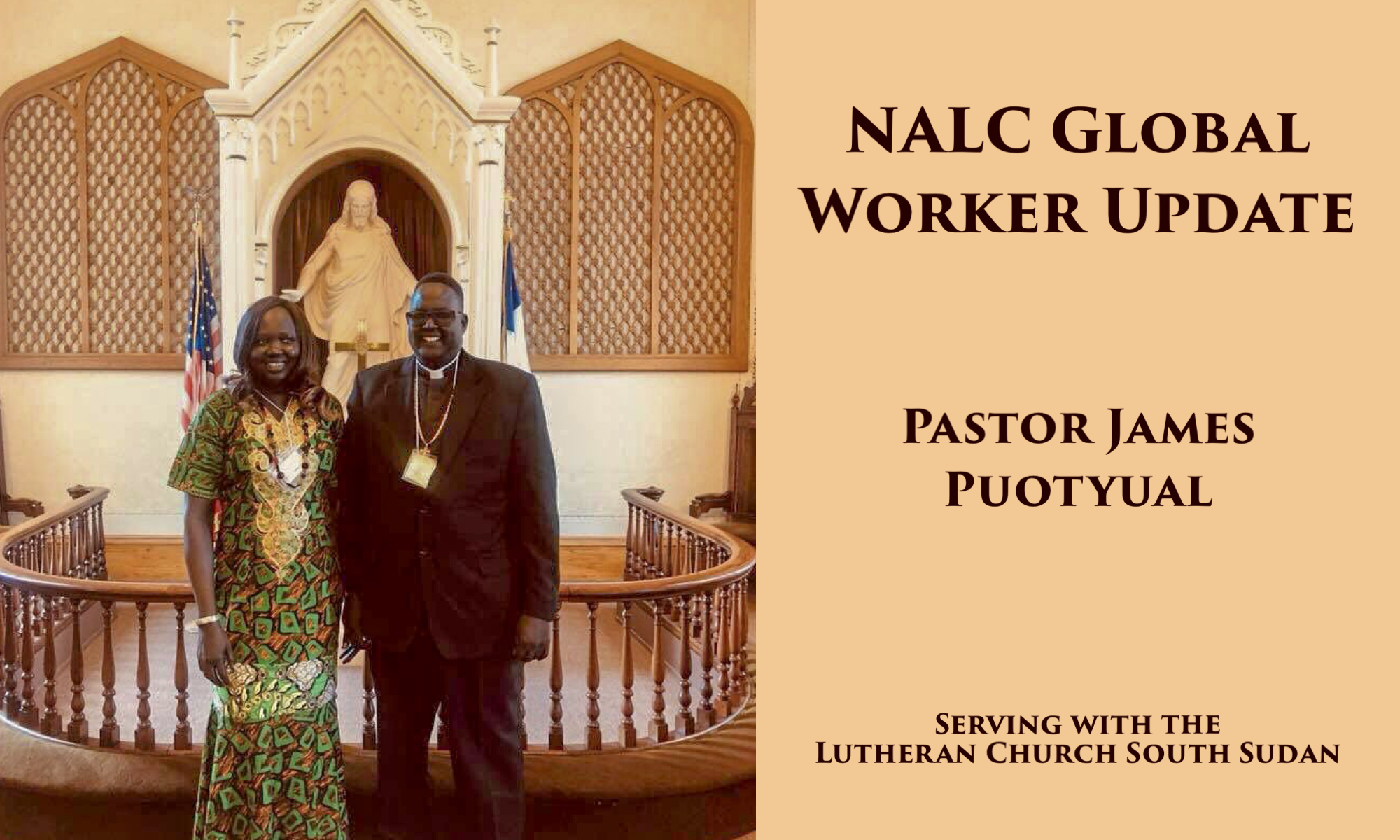 The Rev. James Puotyual is a pastor of the North American Lutheran Church (NALC) and has served as a Global Worker under the supervision of the Lutheran Church of South Sudan (LCSS). His primary role was serving in Gambela, Ethiopia, in partnership with LCSS and the Ethiopian Evangelical Church Mekane Yesus (EECMY).

While serving in Gambela, Pastor Puotyual experienced some health challenges and returned to the United States to receive needed medical care in June 2019. Returning to his family in Des Moines, Iowa, initial treatment and recovery gave way to a referral at Mayo Clinic in the second week of August. Several weeks of very critical health challenges followed, but prayers have been answered with an excellent medical team, a specific diagnosis and the beginning of a true road to healing.

Throughout this time, Bishop John Bradosky, the Rev. Dr. Gemechis Buba, President Jordan Long (LCSS), and the Rev. David Steffenson  have provided pastoral care and support to Pastor James and his family. Pastor James would like to express his gratitude to them, as well as, the many people who have lifted his family up in prayer, especially, his mission district deans and congregations in his home mission districts. The NALC, LCSS, and Pastor James’ family are very grateful for the previous financial support provided.

At this time, Pastor James will remain on temporary medical leave. The NALC Mission Office has the goal of providing additional financial assistance through this time of healing, in the amount of $1,500 per month for 6 months, a total of $9,000. To date, $2,900 has already been raised. We commend this very special need for your consideration. Additional information can be found at: http://bit.ly/TheNALC-Pastor-James

Most importantly, we ask for continued prayers throughout this season for Pastor James, his family, medical team and all those providing ongoing pastoral care and support.

For a more detailed report on Pastor James’ health (shared with his permission), please see the report below from Pastor David Steffenson.

Please direct any questions to the NALC’s Mission Office at [email protected].

Report by the Rev. David Steffenson, pastor of Emmanuel Lutheran Church in Rochester, Minnesota, a mission congregation of the NALC.

Please keep in mind that I am not a doctor, and I am trying to wrap my head around James’ very complex medical situation. My summary notes are an attempt to provide information on his health situation.

James was admitted to the Methodist Hospital (Mayo Clinic) in Rochester, Minnesota, four weeks ago on Wednesday, August 14. After undergoing numerous tests, the doctors attending James believe that his amyloidosis is perhaps the result of tuberculosis (TB) located in the lymph nodes of his neck. The amyloids in his esophagus and in his kidneys have prevented James from eating. In total, he has lost approximately 100 pounds in the last five months. The amyloids in his kidneys have resulted in temporary kidney failure. James has been undergoing dialysis at least three times a week for the past 1-2 weeks. James was removed from isolation in the ICU, after it was determined that he did not have TB in the lungs. Last Wednesday (September 4), James was getting out of bed and sitting up. His condition was much better. When I saw him on September 5, James was once again standing, taking a couple of steps and sitting up in a chair.

Unfortunately, around 5 p.m. on September 5, James had a major setback. He had, what appeared to be, a seizure. He was unresponsive and rushed to the ICU. I was called to the hospital and spent most of the night with his wife Nyandit. After running a CT scan, and an MRI the next day, it was determined that James did not have a stroke. There was no bleeding in the brain. The doctor said that James’ high blood pressure caused a PRES in the back of his brain. (Posterior Reversible Encephalopathy Syndrome; i.e. a syndrome characterized by headache, confusion, seizures and visual loss. It may occur due to a number of causes, predominantly malignant hypertension, eclampsia and some medical treatments.) It was good to hear that James had not had a stroke. On Sunday, September 8, James was moved to intermediate ICU. He pulled his drainage tube out of his nose twice on Sunday; thus, requiring an in-room nurse to make sure that he doesn’t pull out his IV’s, etc.

I have seen James and Nyandit every day since Sunday. Pastor Marshall Hahn drove up from Iowa and visited with James on Monday, September 9. His visit was much appreciated! Nyandit has been worried about not having her thyroid medicine with her. I was able to get her uncle to send it express mail overnight up from Des Moines, Iowa. I wish you could have seen Nyandit’s face when I gave her the package with her medicine yesterday. Her face lit up with overflowing joy. Yesterday, while visiting with James, I called Pastor Mark Lund from Boyden, Iowa. James was delighted to hear Mark’s voice on speaker phone.

I plan on visiting James and Nyandit today. I’m hoping that the hospital social worker will be able to meet with us, as well. The social worker is the primary contact person with Nyandit’s work supervisor in Iowa. Presently, Nyandit has been authorized to have two weeks leave of absence from work. James’ doctor reminded us that James will likely be in the hospital for another month or so. He has a long road ahead of him. The doctor also reminded us that his path of recovery will be more like a roller coaster. They are watching him carefully to guard James against infection, etc. Nyandit spends most nights at the hospital. James and Nyandit, and their children (Jal and Nyalat) are VERY grateful for all the prayers and the financial gifts of so many friends. Please keep the prayers coming. Nyandit repeatedly confesses her faith and bears bold witness to the healing power and grace of Jesus: “God is good!” she says.

Blessings to each of you in your walk of faith with Christ Jesus, who is Lord of all!

A Servant of Emmanuel,